Im finally back in California after a very long crazy but wonderful journey across the states. My body has landed but my soul still feels like it’s out there traveling around. So now I begin the process of getting everyone’s lovely treats sent out. Please accept my heartfelt thanks for the patience you’ve all shown me.

As promised here is a blog about the trip we took. 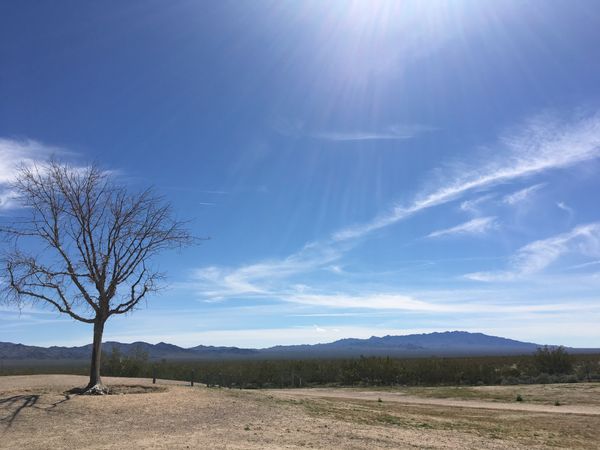 I realized after meeting so many people who couldn’t travel who expressed their gratitude for sharing photos of the trips and stories from the road that it would be good to give a bit more detail. I realize how lucky I am to have my mobility and to be able to see these places. So this is for you guys who asked me to write about my wacky RV trip.

The first con was in New Jersey and I had planned to give myself a week to get there however I ended up leaving a couple days late because I had to refill Gingey’s medicines unexpectedly. He had only just completed a series of radiation treatments for the cancer on his leg and was really fighting to get healthy again. The dr. Advised against taking him with me but I know my Gbear. He would not be ok being left behind in someone else’s care or god forbid boarded.

So with my little red furred soldier in tow we headed out onto the road for the long journey across the states. Some people find it odd that I loathe flying but it’s pretty self explanatory if you’ve ever flown commercial why its repellant. The crowds, the obnoxious and at times rude TSA experiences and if you’re me the endless questioning from strangers never mind the whole fear of crashing from 35 thousand feet in the air. I grew up flying on planes all over the world for work, for publicity etc so I don’t enjoy it. Being on the road you can have amazing experiences, see things you never even thought possible, meet amazing people, see nature in its purest raw form and you remember the trips. I rarely remember airplane trips but that’s just me. 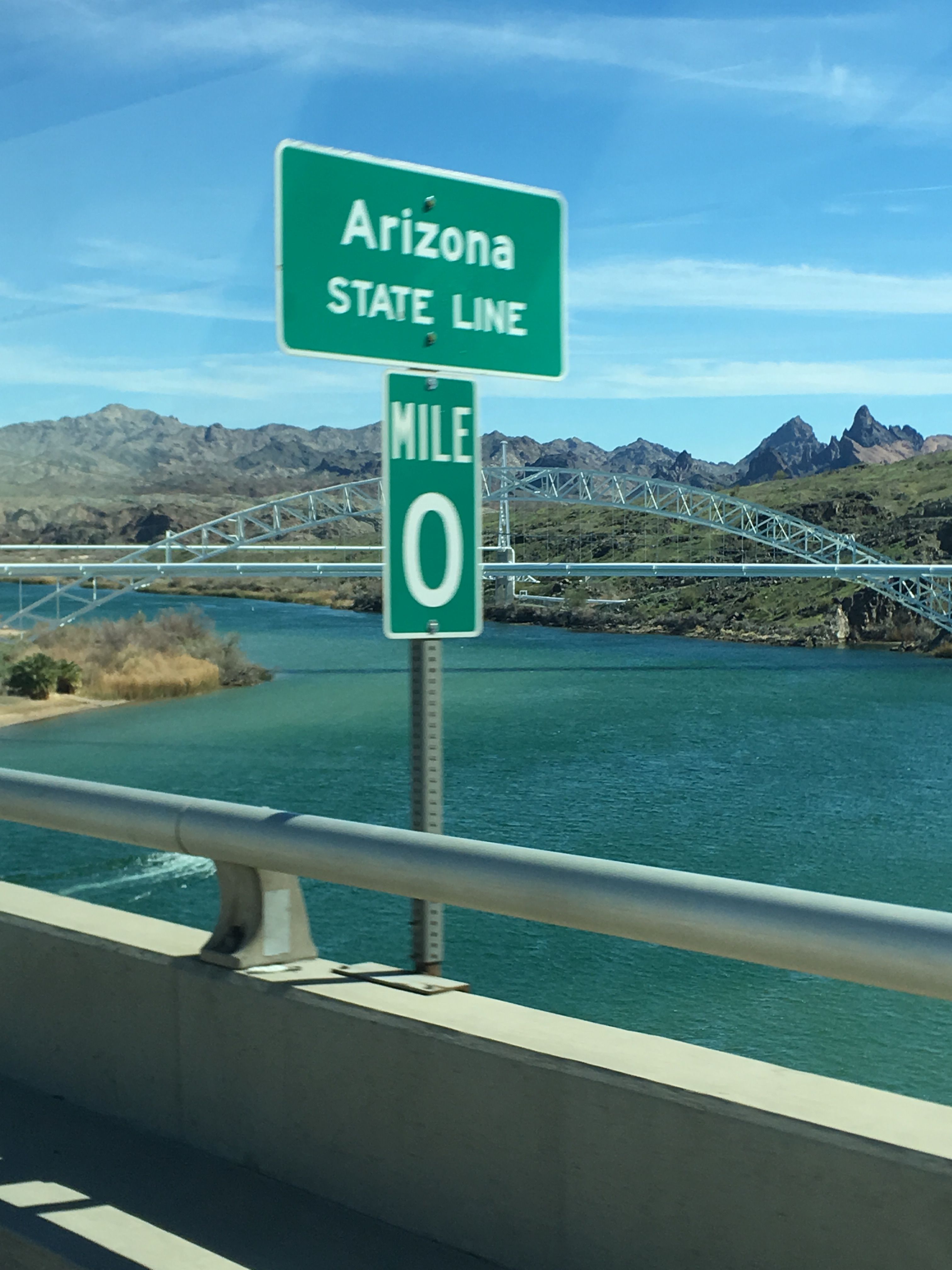 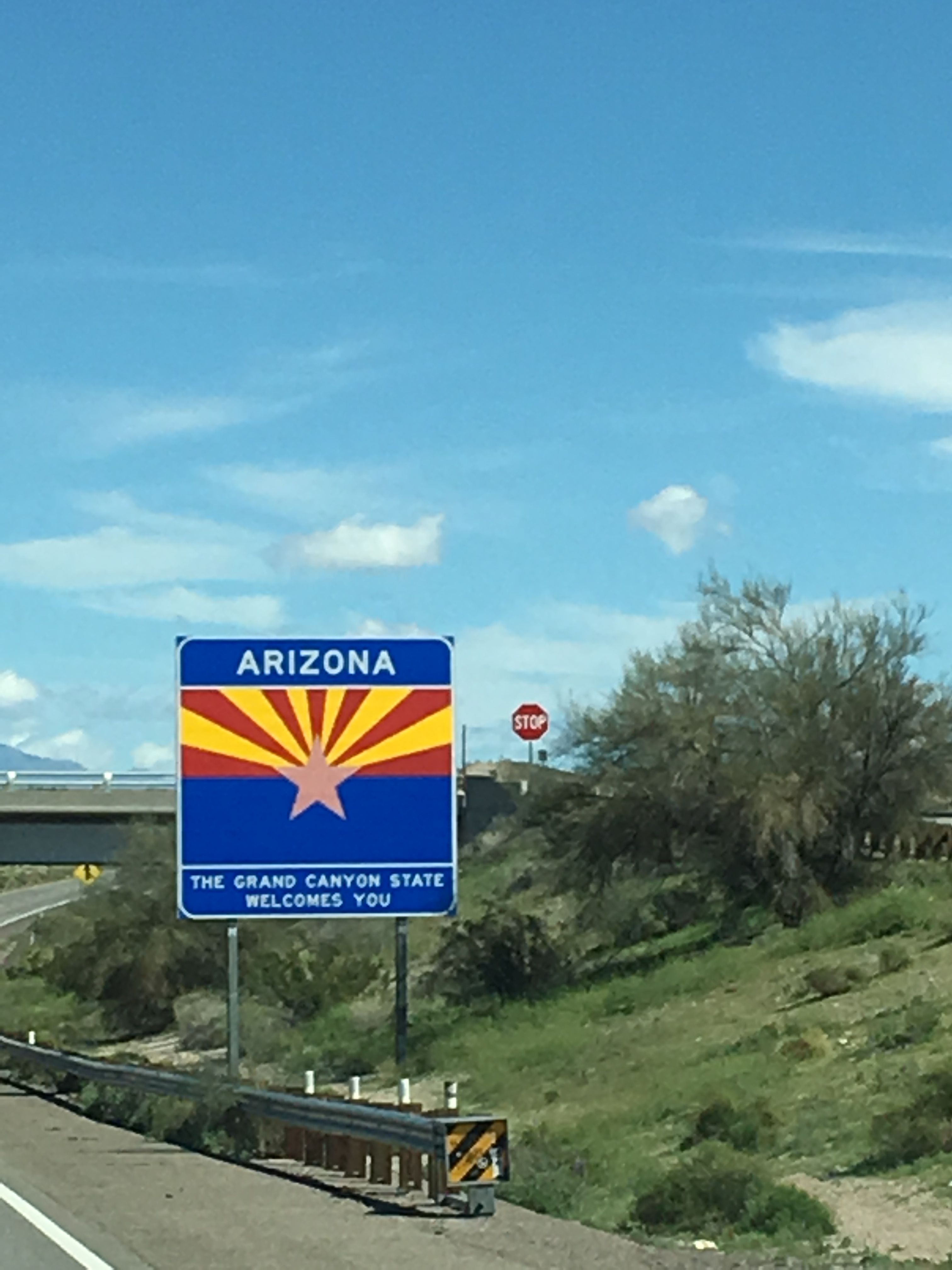 When you live in or near a huge city it’s always best to leave at night to avoid heinous traffic. We’ll usually drive as long as possible the first few days which gets us into AZ. I’m not sure why but I love the desert scenery, the mesas and rock formations. There’s a sense of ancient history looking into the face of a mountain where you can see different levels of earth that have been worn away by time, wind, water and weather. The color of the sky changes to a deeper blue and the horizon stretches out giving you an altered sense of its dimensions. It calms me. 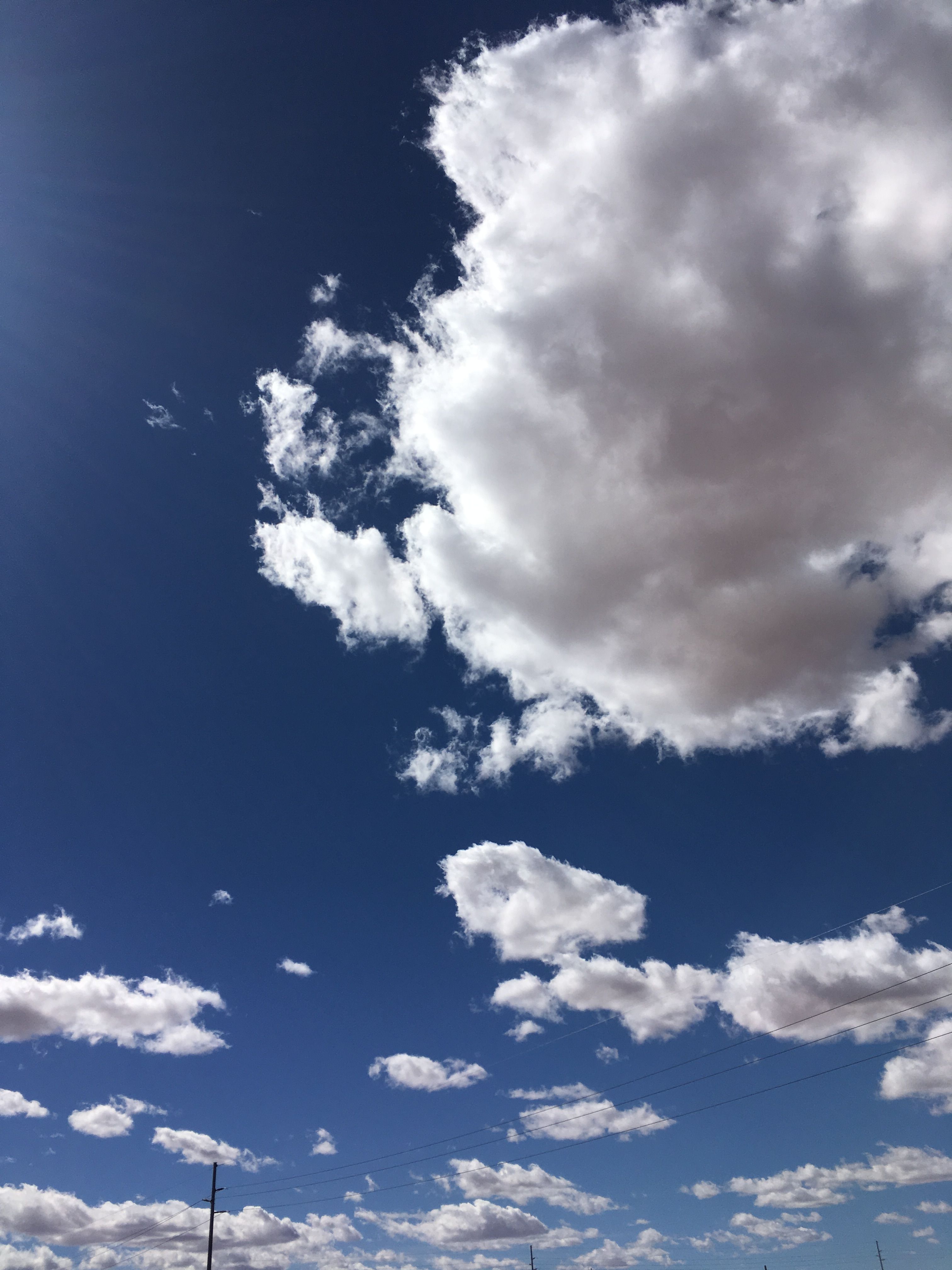 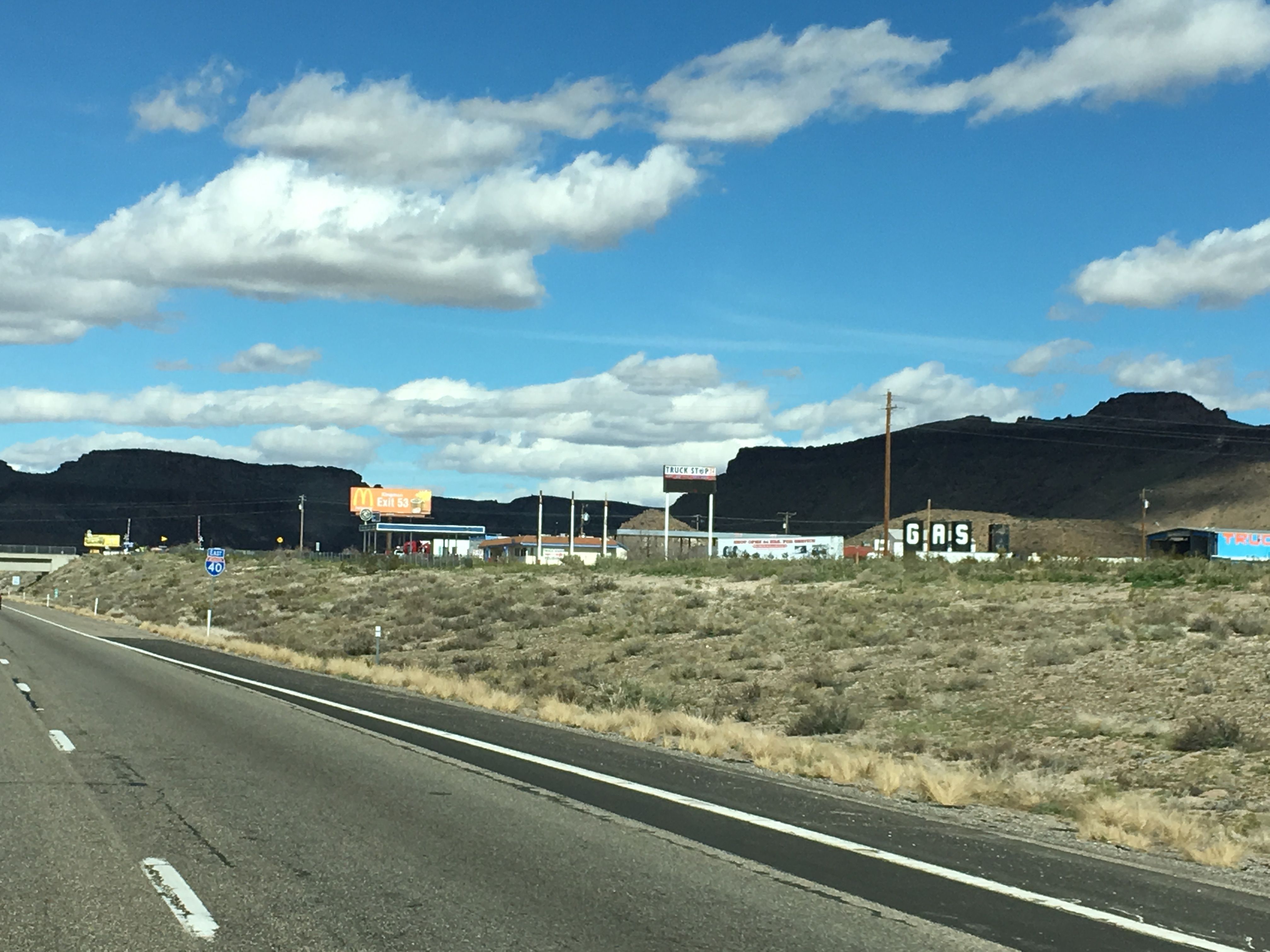 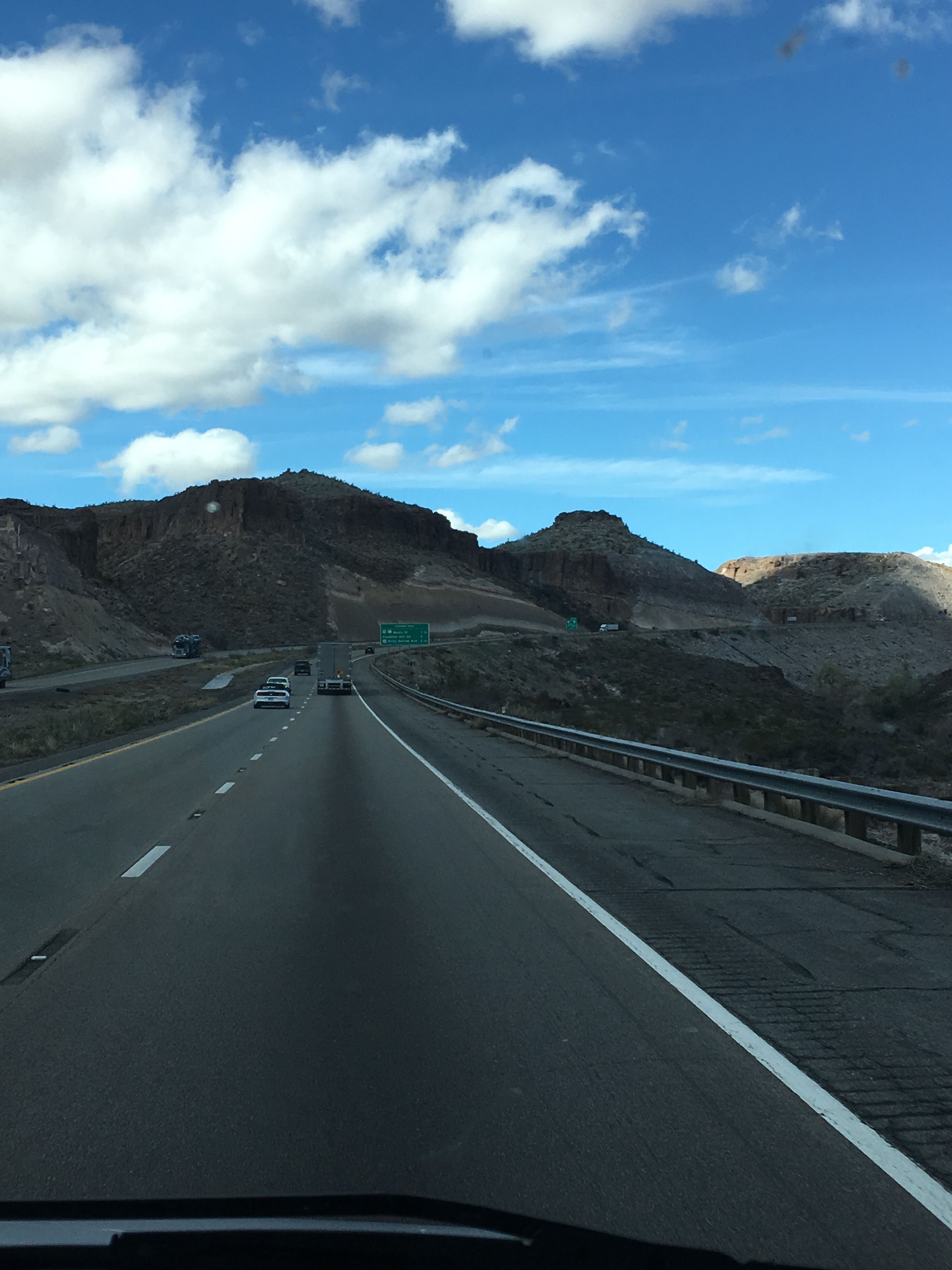 Going east in the I40 you pass Lake Havasu which is a destination for boating enthusiasts and as soon as you cross the state line the surroundings change. I’ve never driven this freeway at this time of year but it was so much prettier than fall as there are purple chia, blue wild lupin and Orange wild poppies growing in thick lines along side the highway and the dunes this year were carpeted in electric yellow flowers. The desert completely transforms itself and the ground that’s usually flat dusty brown becomes absolutely electric with color.There were récord rains and snow this past winter so I got to see what is called a “ Super Bloom”. Apparently it hasn’t happened in 18 years. I felt very lucky to be privy to this particular show.

When I was younger I was a city girl. I didn’t get why my Mum and other women were so into their gardens and growing things but I think when you’re in your early 20’s you’re almost myopic about succeeding in your chosen field. The more you learn the more you realize that the things you thought were so important really aren’t nearly as important as you believed them to be. Work is important of course but it’s not everything. If your work is the only thing in your life, it can get very empty and very lonely. It was for me anyway,It doesn’t love you back like a lover or a garden or an animal or Art does. It’s rewards are different.

There are a few landmarks I always like to see as I go along, there’s a crazy giant geodesic dome that looks like a giant golf ball. I was told it used to be a nightclub in the 70’s.... “giant golf ball nightclub” not something you see every day. You start seeing Route 66 painted on everything from signs, abandoned buildings, water towers, old RV’s that have seen better days. For those of you who don’t know this, Route 66 is the original cross country road that runs alongside the i40Highway . I haven’t yet done the trip on the 66 but maybe I will some day. 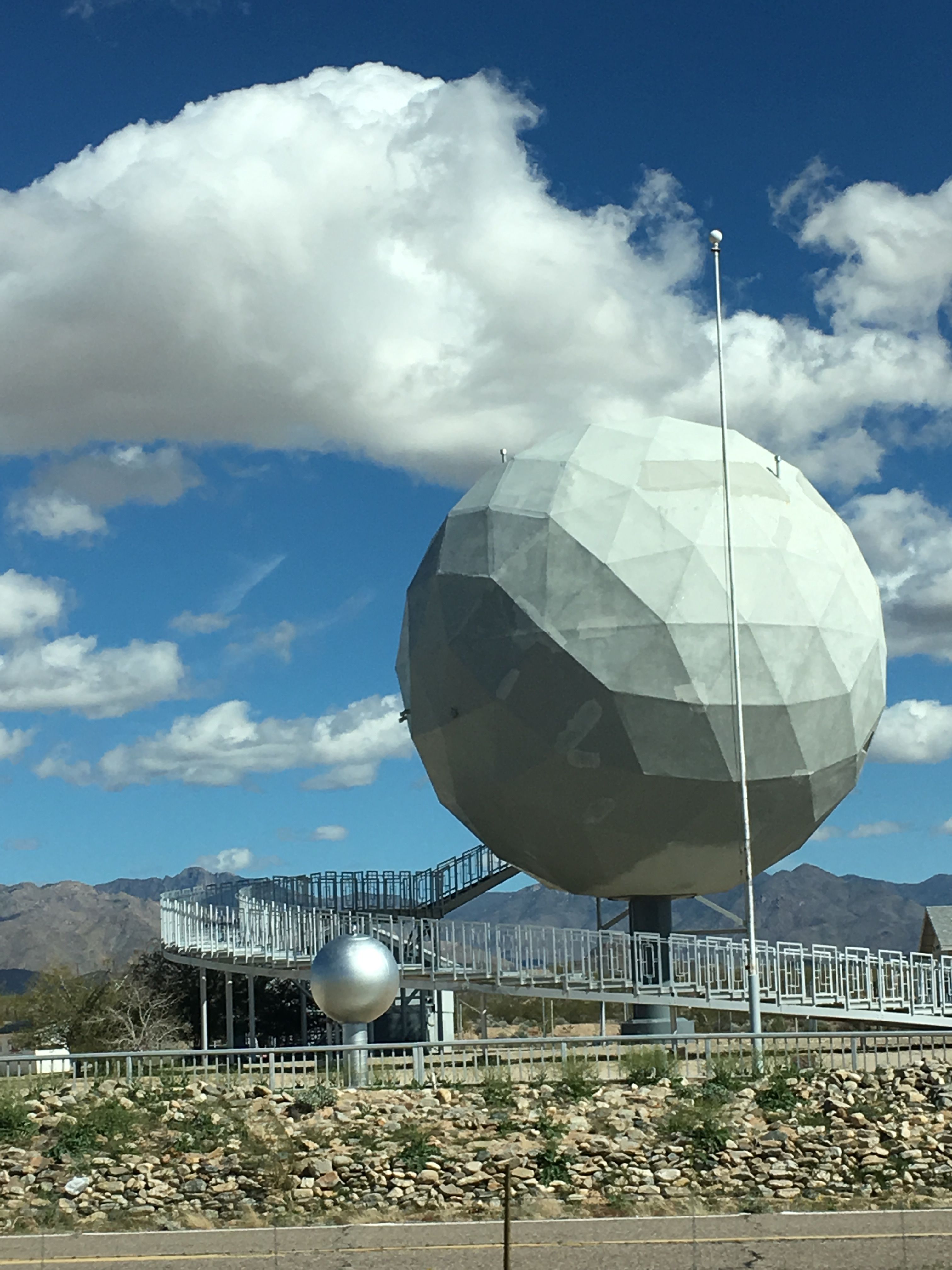 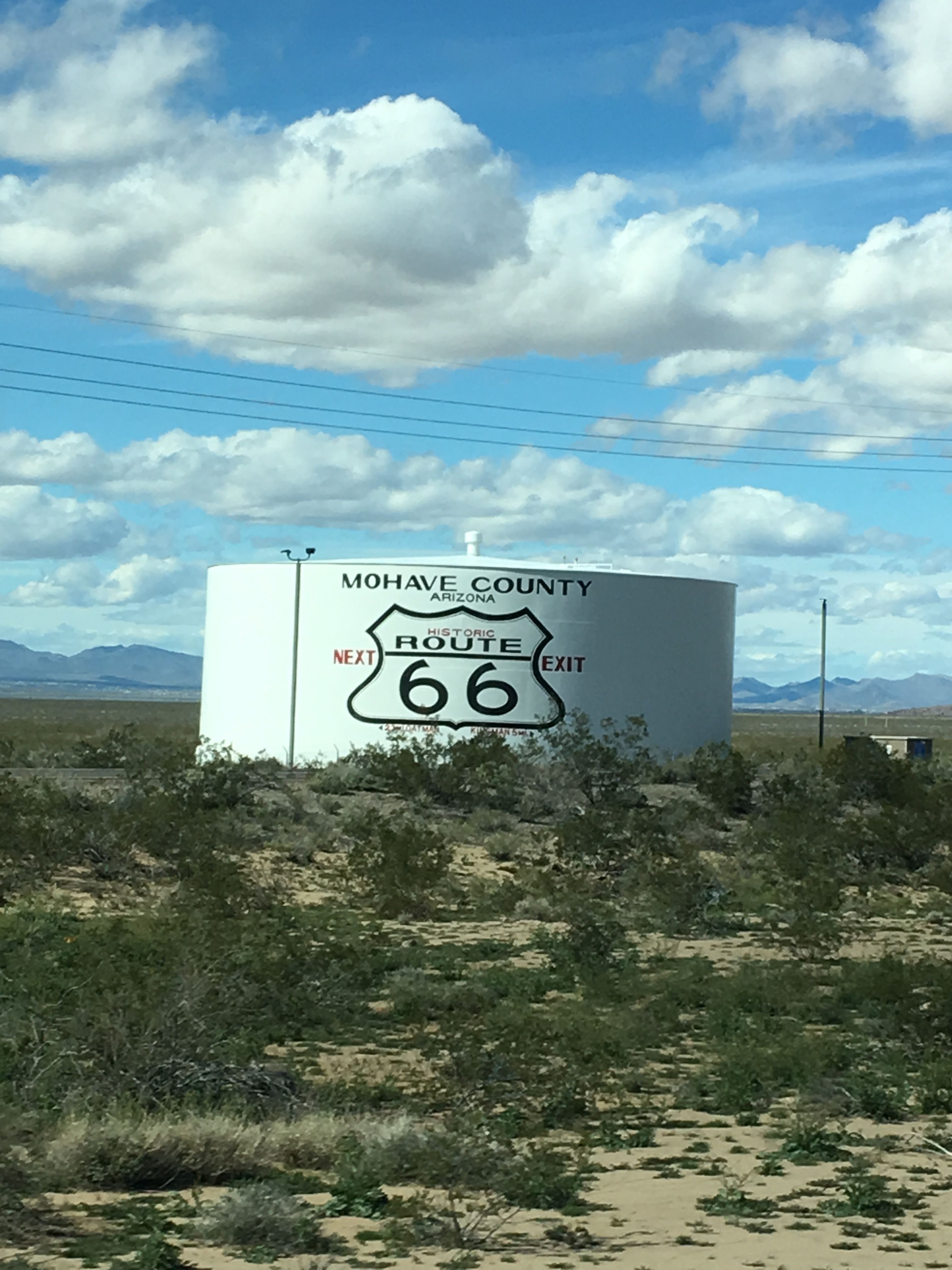 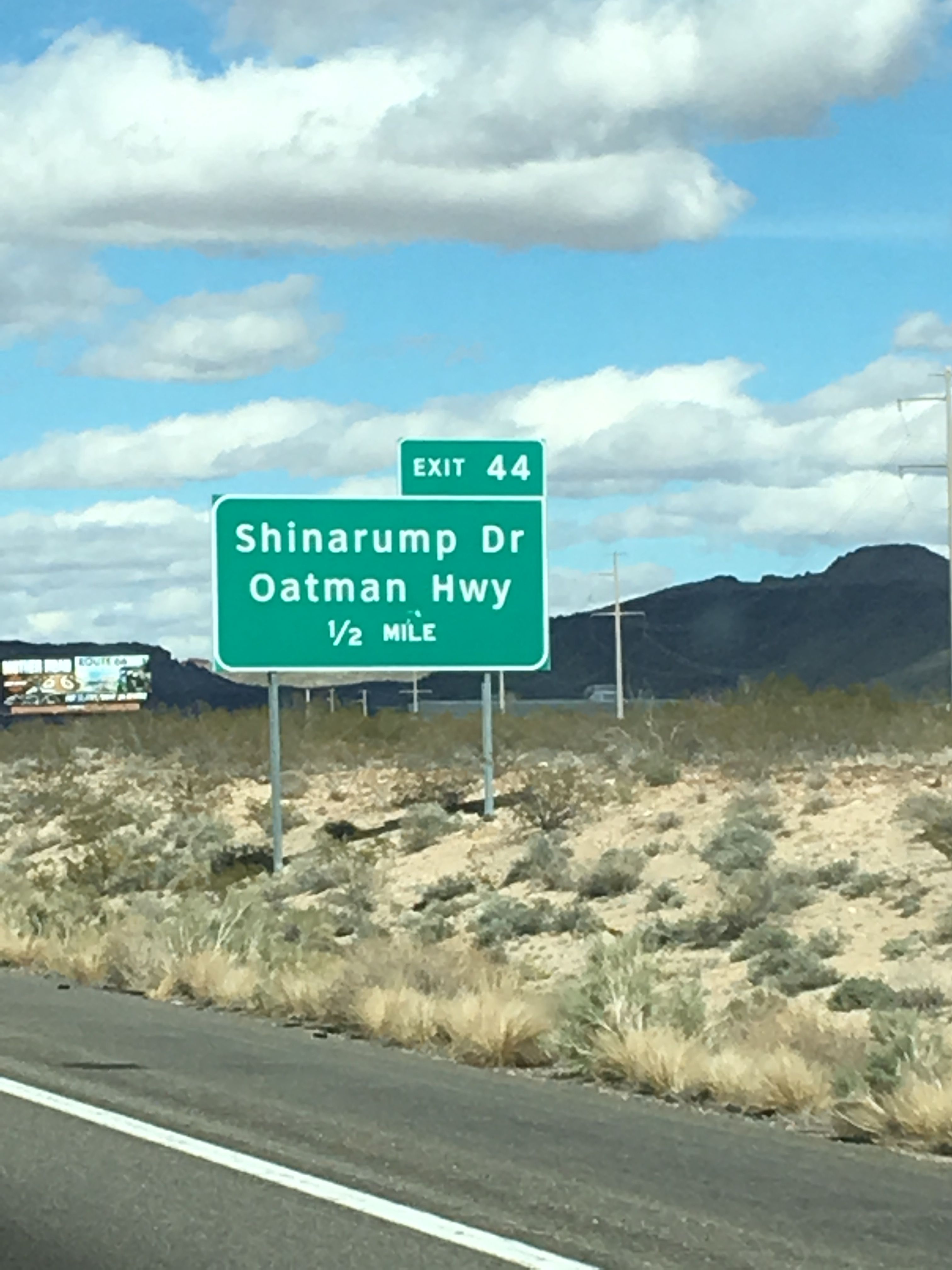 There’s something about being out on the road hours from any town or even gas station, just you, the road and the land. The frantic non stop mental babble that my Gemini brain constantly tormenta me with shuts up and watches through the windows. I find it very inspiring. It’s not easy to find that inner quiet that the road provides so effortlessly. I like to try to catch photos of the weird billboards I see and the many odd handmade dinosaur sculptures that pop up all along the way in the southwestern states. We’re usually going about 75 mph (sometimes faster if I’m running late) so it’s tricky as they fly by so fast. 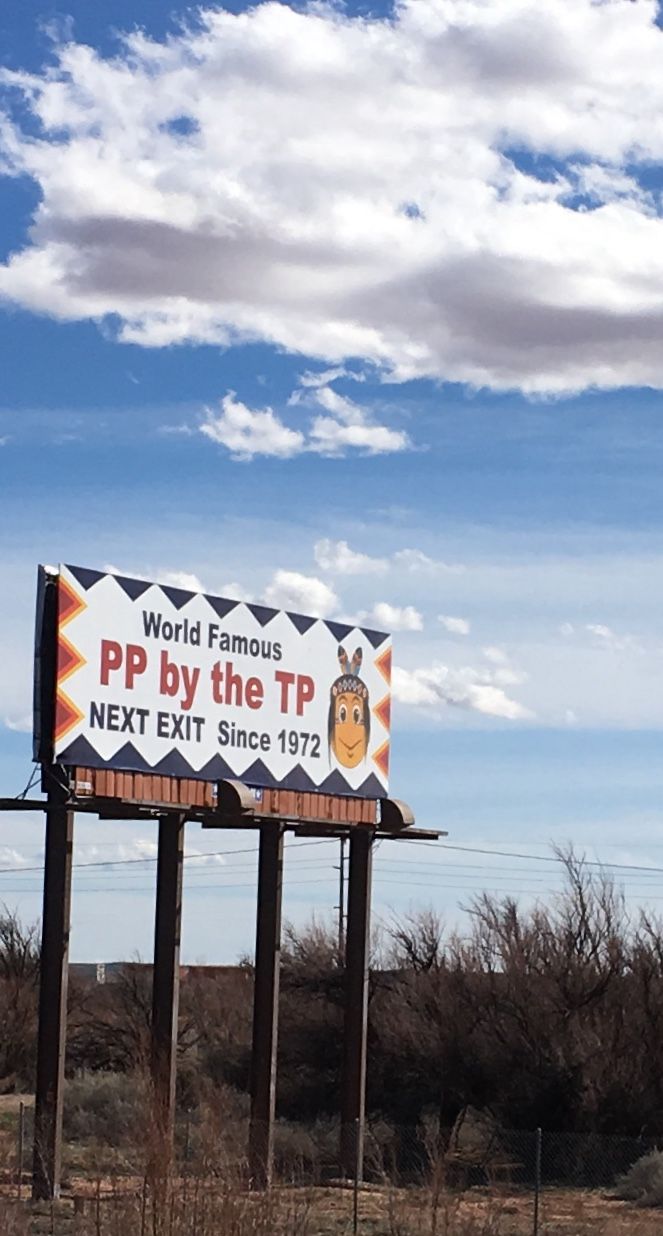 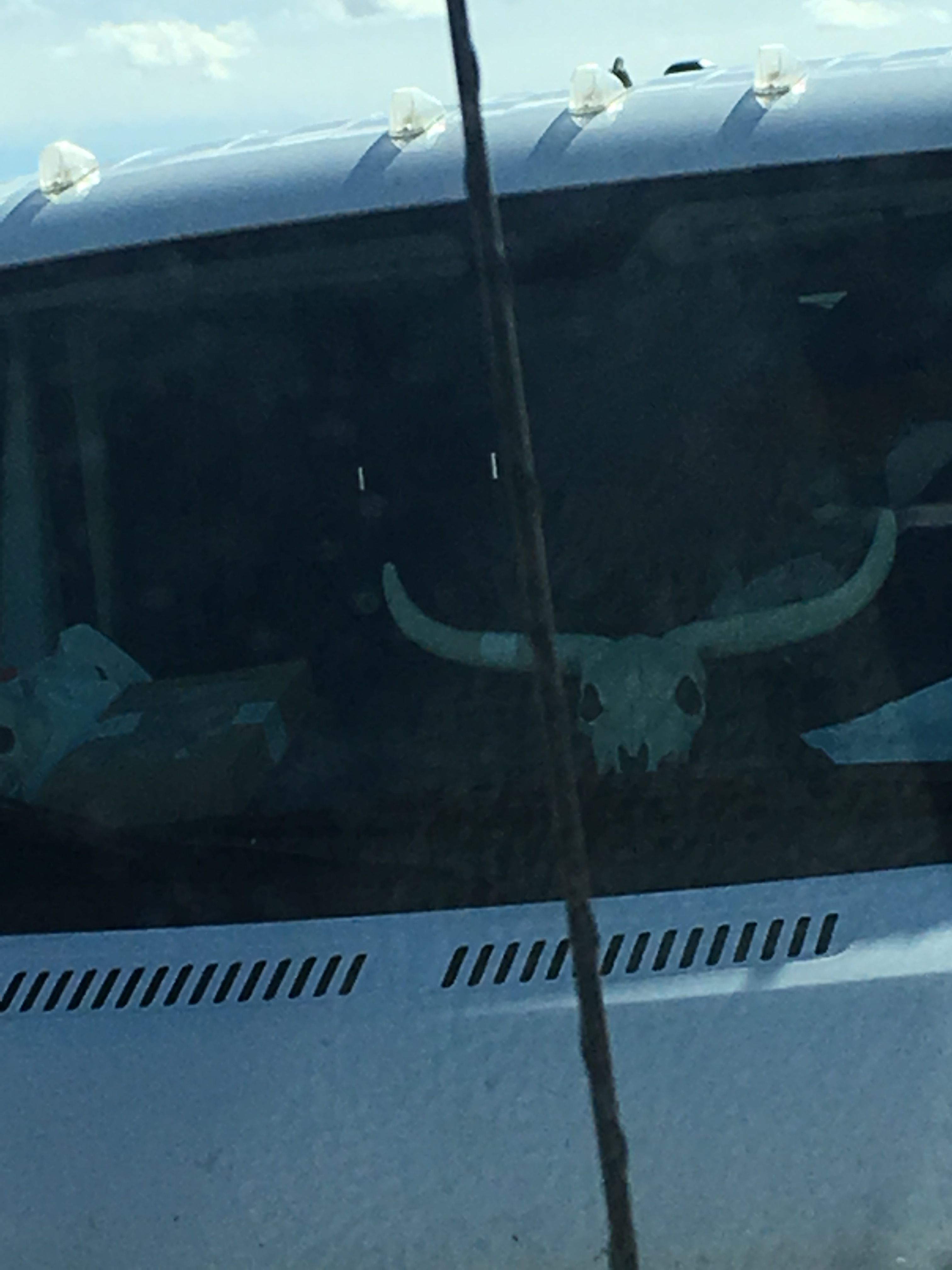 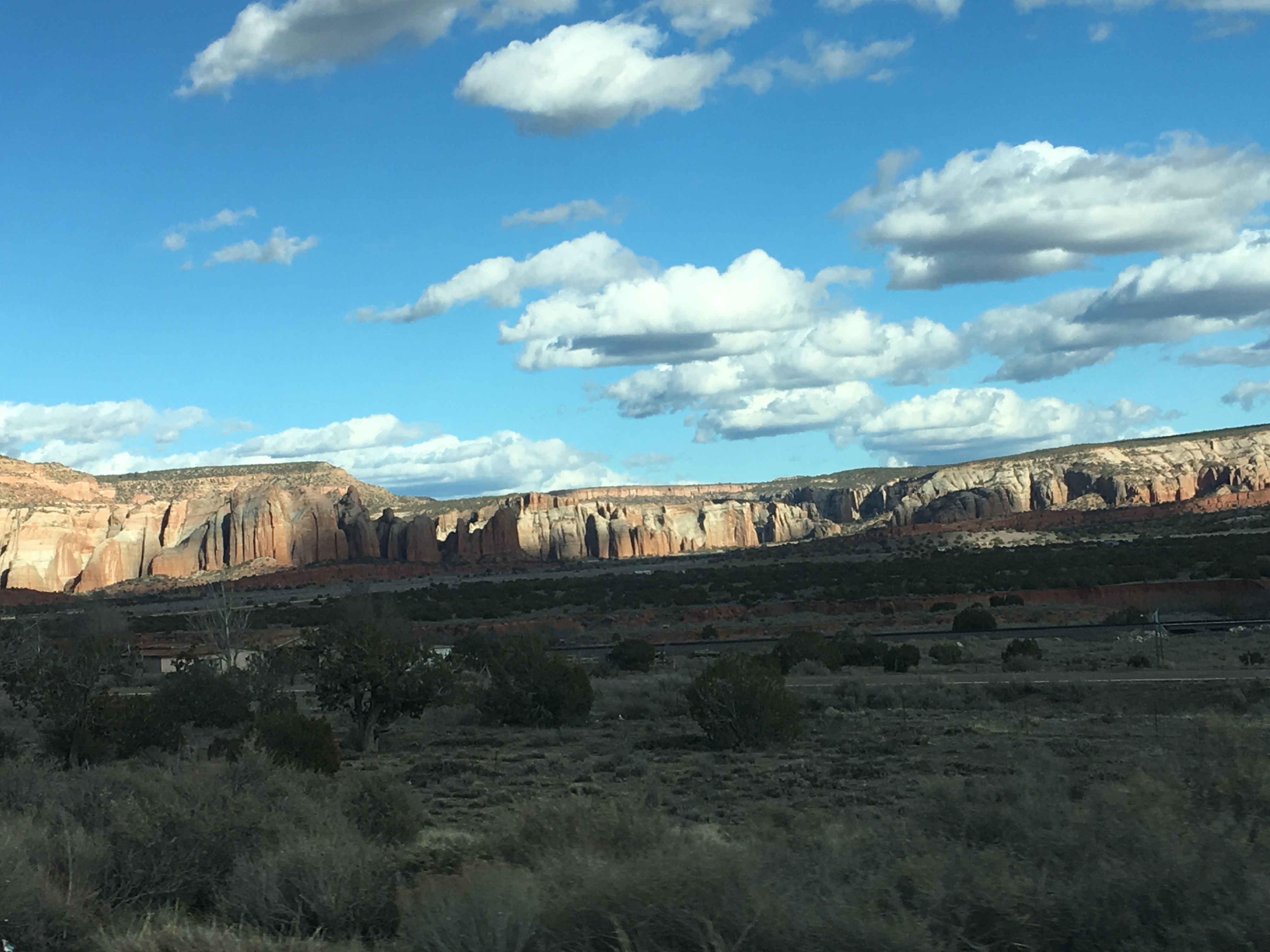 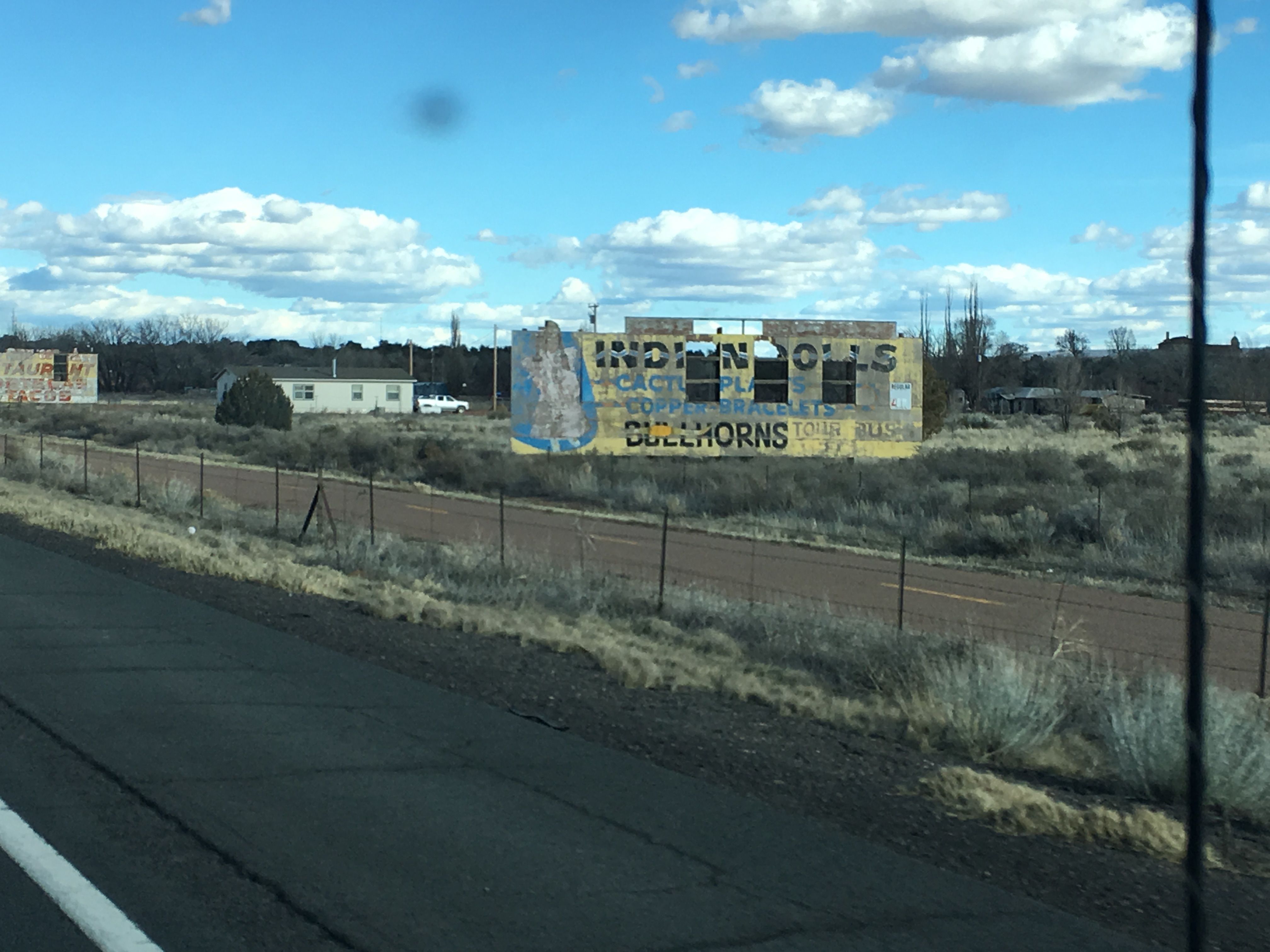 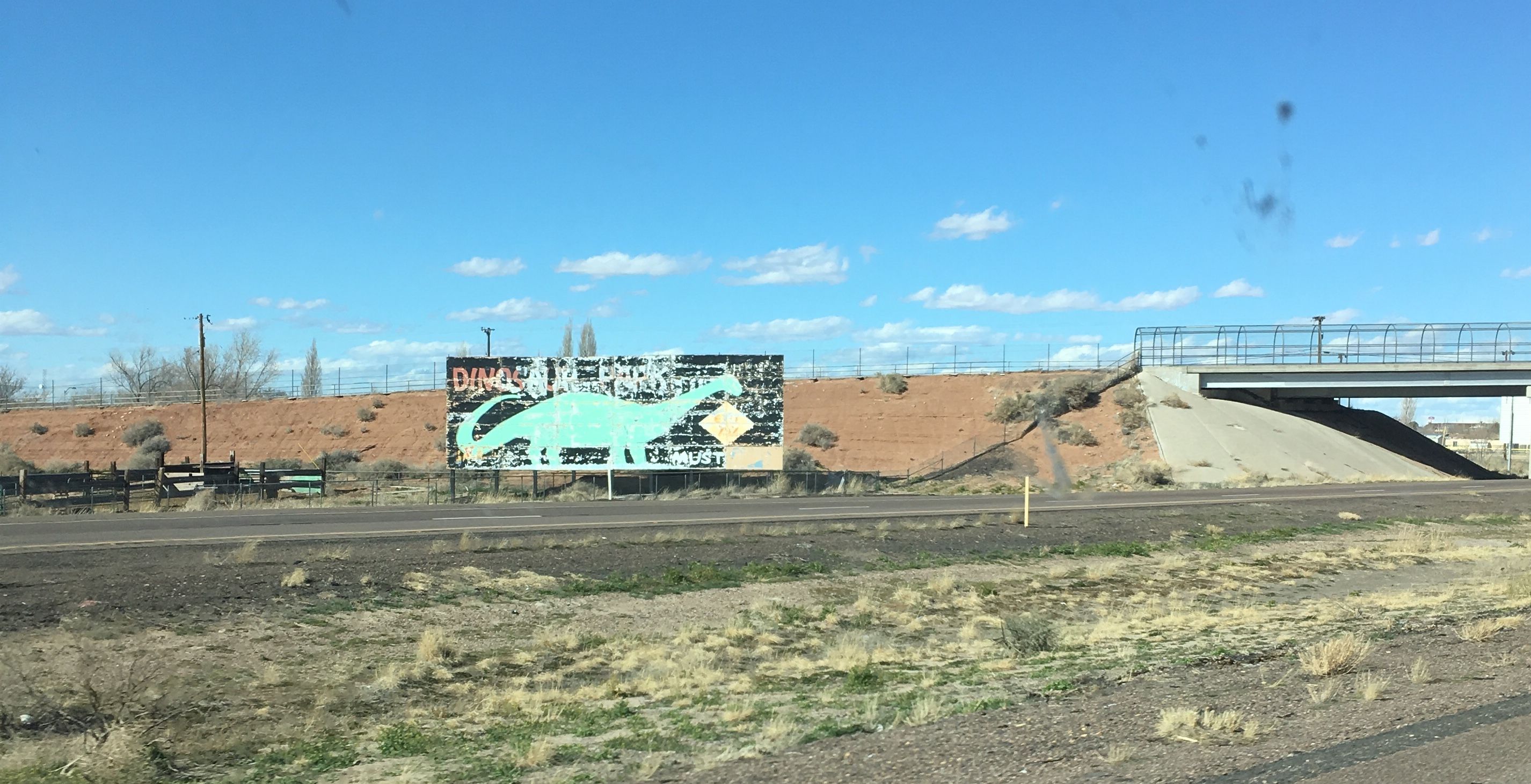 We hit the conocí forest headed towards flagstaff and noticed this time that there were digital signs over the highway that read “Please don’t stop on the side of the highway to play in the snow”! I guess some people actually do that? They must or there would be no need for the big digital signs!! “ Hey Larry lets go make snowballs!-KASQUISH!!!! As a huge semi eats their Subaru Outback.

There was snow in the ground up there and I check into the weather and as luck would have it a freak cold front from Alaska had decided to drop right into our path. I was a bit worried about the water system in the RV freezing up and potentially cracking costing us loads and negating our having a bathroom or running water for the foreseeable future of the trip. We kept right on going though. At around 1;30 am we pulled into a rest stop near Santa Rosa in a mountain pass and it was the eeriest most beautiful sight. It looks as if the rain had frozen sideways on the branches of the trees. It was deadly quiet, 14 below zero and very much like driving through Narnia from the Lion The Witch and The Wardrobe book. A van, a couple cars and a few big rigs had parked to sleep up there which surprised me and made me very grateful for the heater we had blasting away in the RV. In an RV you can turn off the engine and use the built in heater at night. Keeps you snug as bugs in rugs.

Figured if we kept going it wouldn’t be quite so freezing as we were still in the mountains. 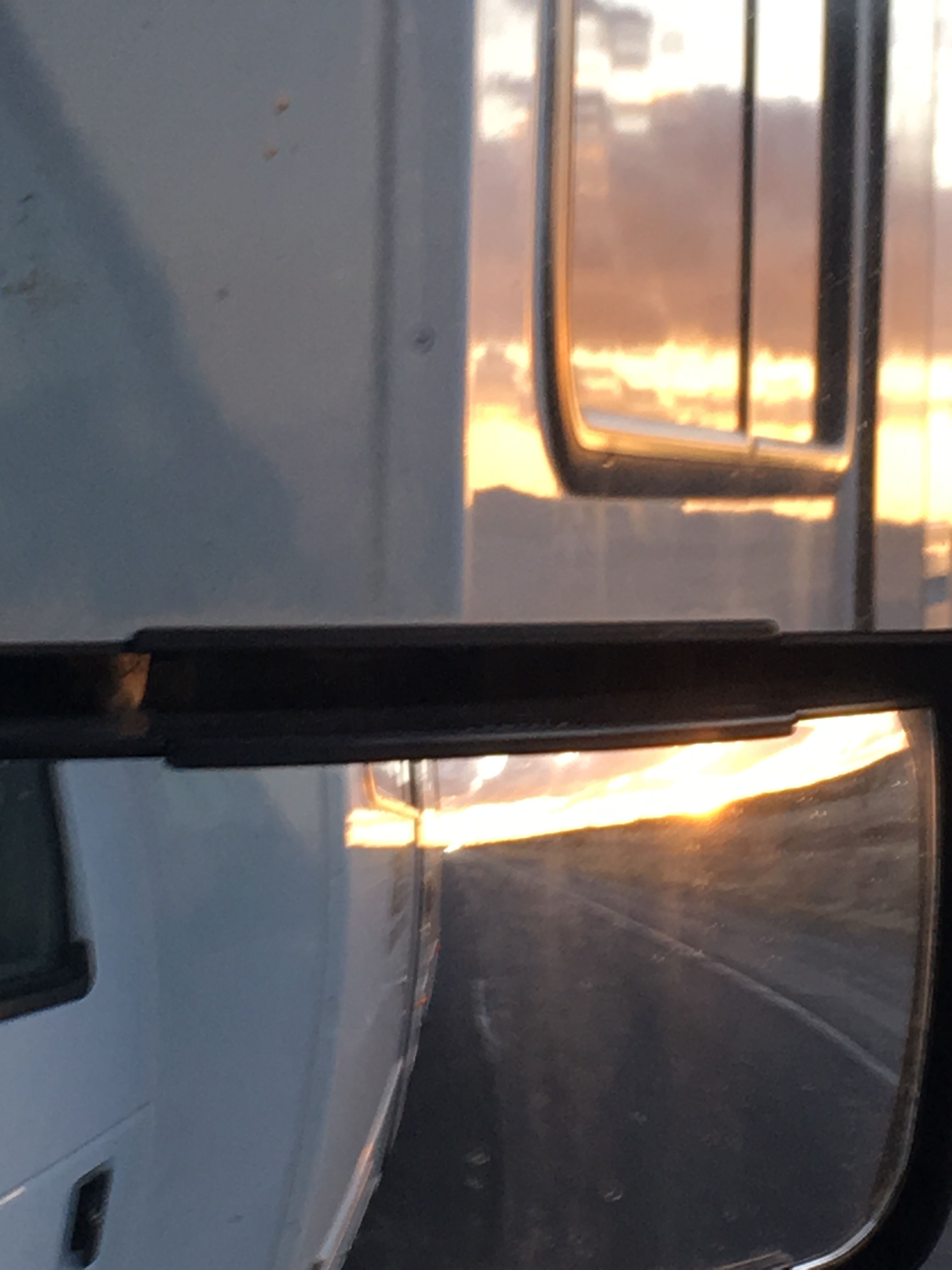 As you cross into New Mexico you pass one of my favorite spots, it’s called Window Rock named for the naturally formed holes in the massive rock faces that run alongside the highway. At one point there were little visitor shops in the shape of teePee’s and old west style shacks but they’re closed nowadays. Someone put plastic deer, an eagle, a bear and a few other assorted plastic animals up high on the rocks. They’re paint has faded and chipped away over the years but they’re still a friendly reminder of an era when road trips were still “the thing to do”. Sometimes you’ll see freight trains go by that are so long it seems like they go for miles. I always wonder what the stories are of the people who have graffitied on them. The idea of your tag or your name traveling to all the places you hope to one day see.... or maybe they are seeing them? I’ll never know. Train hopping is fun but I wouldn’t recommend it as it can tear you to pieces if you don’t know how to do it and which cars you can jump onto never mind that it’s illegal.

Another story for another time.

I wanted to stop in at Gallup NM but we didn’t have time. We had to eat serious road to make it all the way to NJ.

New Mexico is so truly beautiful to drive through. The soil, the mountains, the rocks are every shade of red, pink orange violet and purple. It’s the only place I’ve ever seen that has purple soil. I fell in love with it while we were filming Gas Food and Lodging in a town called Deming. I love Santa Fé New Mexico especially.

If you have never been there I recommend you go at least once. It is a magical, beautiful, cultured and very interesting place. I’m sure there are many YouTube shows that could give you some eye candy and give you an idea of what I’m talking about. 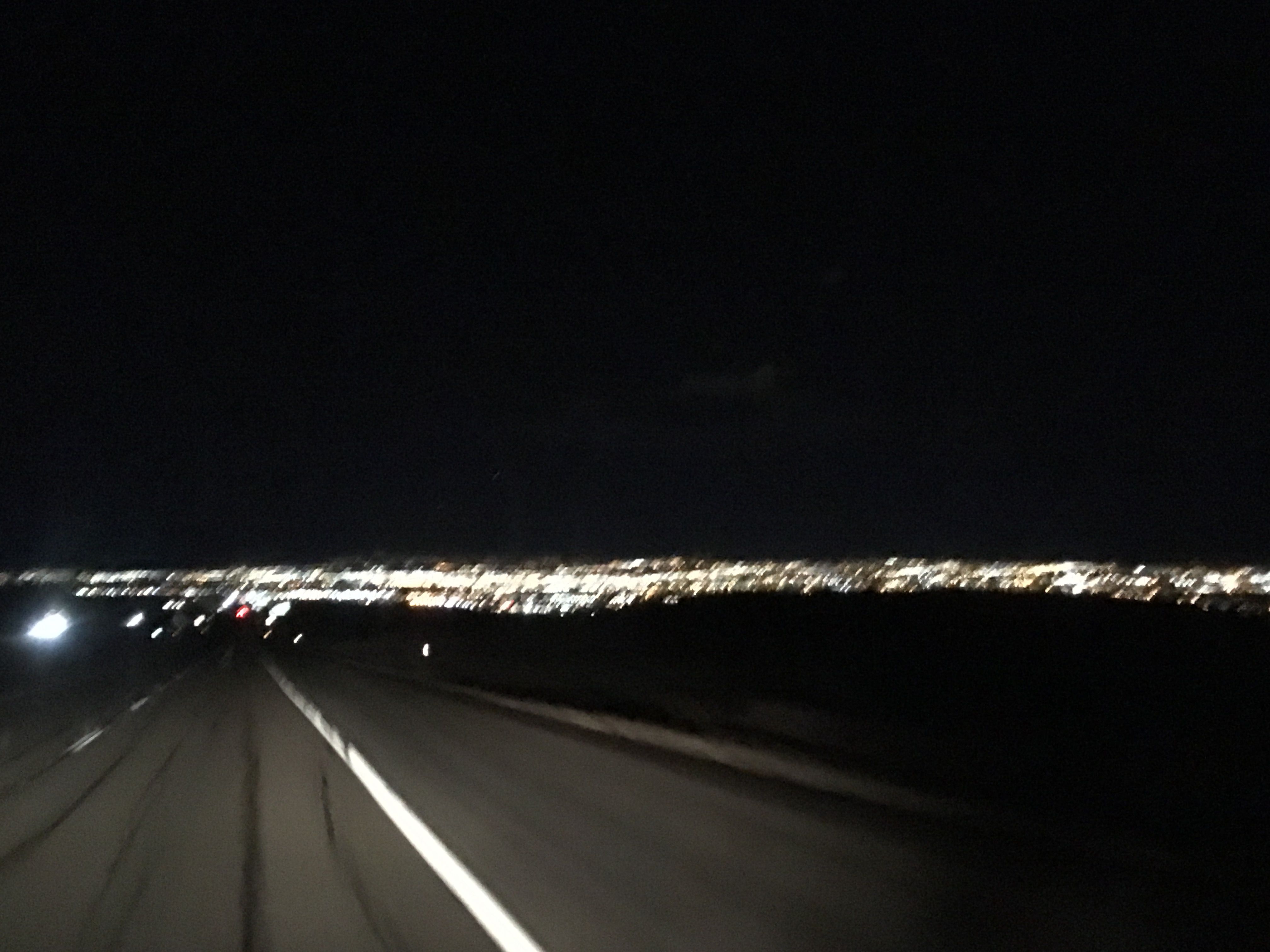 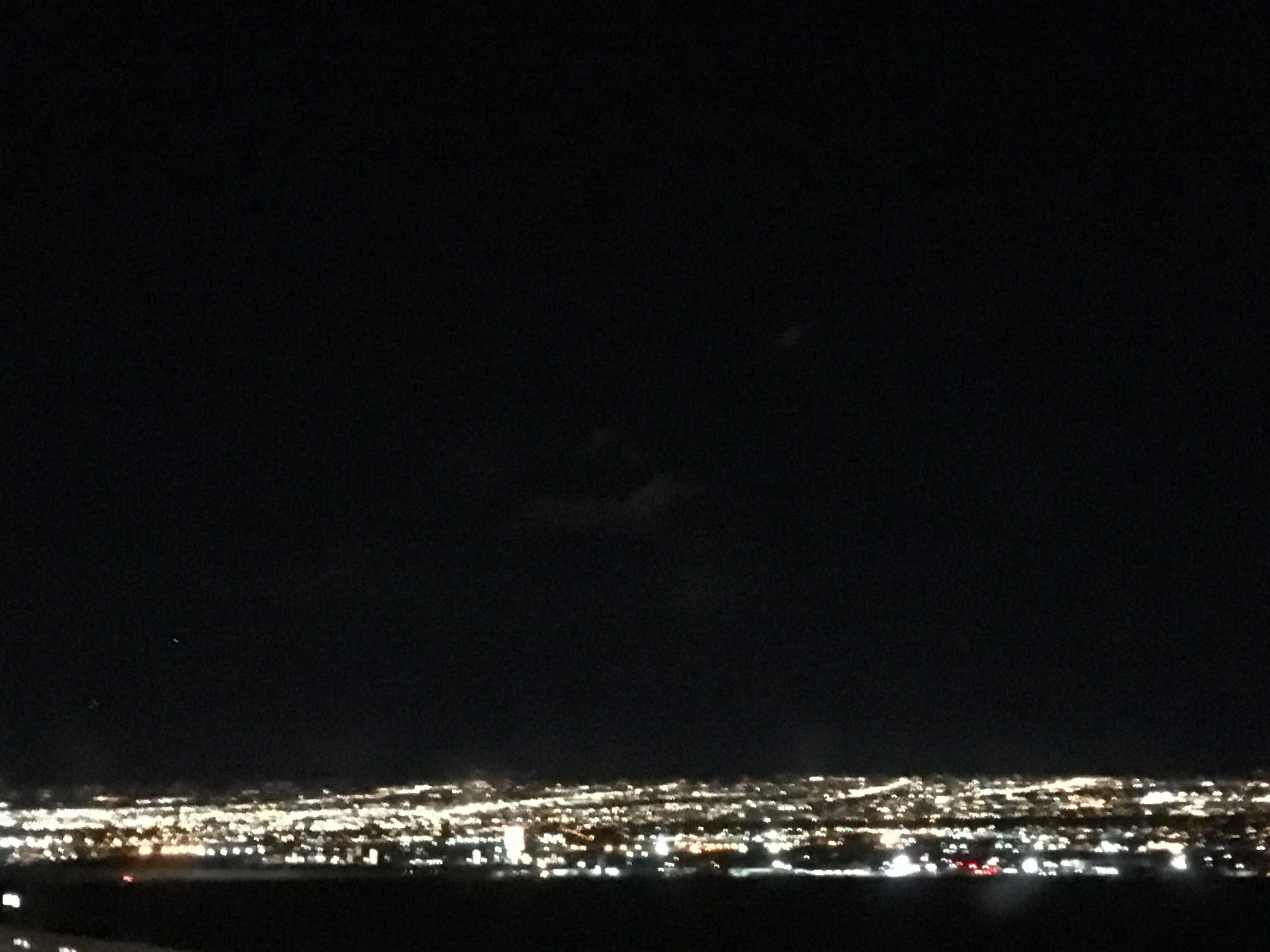